This morning it was forecasted to be cloudy with a high of 72, but when I looked out I could see blue sky and sunlight around the edges of the clouds.   After the hot days we have had I won't mind a little cloud cover.

After breakfast, I mentioned to Yuma that today was bath day and I get that "poor me" look. 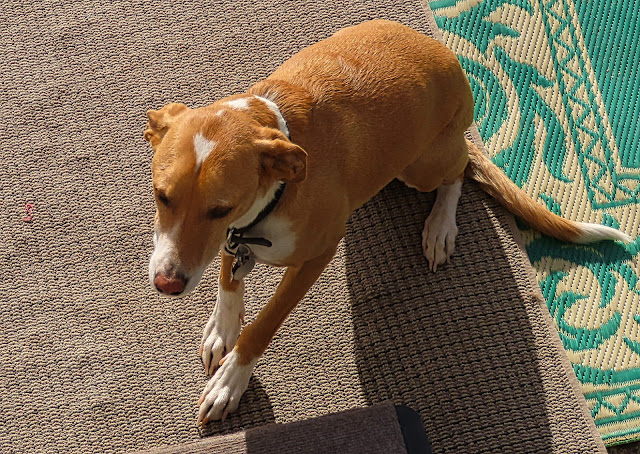 But he came right in and jumped in the shower like a good boy.  He is always happy when it's over and he is nice and clean.

It was a little after 11 o'clock when Yuma and I jumped in the Jeep to get gas and a quick stop at Home Depot to look for a hinge for the screen door that needs to be replaced.

I had just pulled into a parking place at the Home Depot when I heard "Doug, Yuma is that you?"  I couldn't tell where it was coming from and then this young lady comes up to the window and I recognized her, but of course her name didn't just come falling out of my old befuddled brain.

She says she couldn't believe that she and her husband had just run into us.  They had been thinking of us and wondered if were out here this year.  They mentioned their names and they were Liz and Toby.   Last March when I was waiting to have my solar panels installed they were having theirs installed.

We were both parked in the same lot so got to know each other for the days we were there waiting for our solar panels to be installed.  Liz and Toby are a very young couple in their late 20s or early 30s and they have a 24 foot trailer and were just starting out their lives as full-timers.  They also had a young pup too.

I had texted them when I first got to Yuma, but didn't hear back.  They had changed phones and had a new number so we lost contact.  They are staying about five miles from where I'm staying so we made plans to get together soon and catch up.  Amazing how small the world is for RVers.

Returned home and laid out in my lounger and watched the hummingbird go back and forth visiting my feeder.  Just one.  Hoping more will come later.

Around 4:30, Yuma and I headed over to the tent for this evening's happy hour. 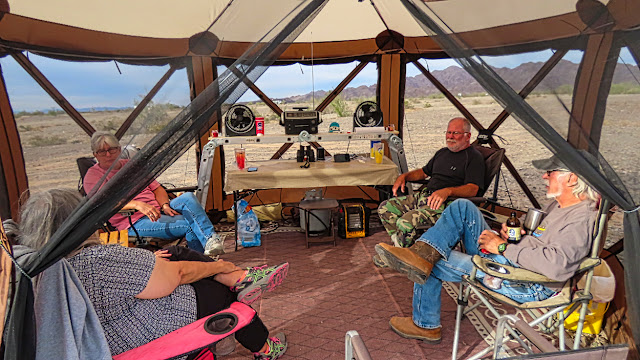 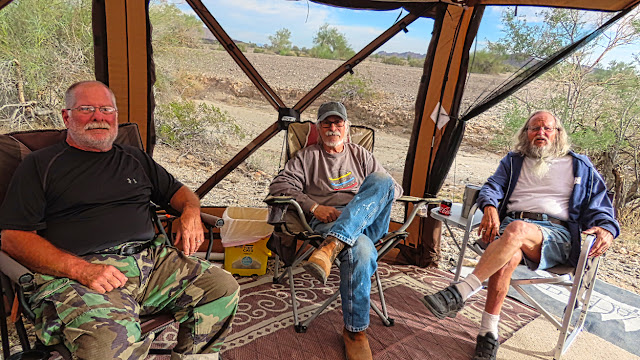 Looking south down American Girl Mine Wash.  If you look carefully, you can see the White Lion through the bushes right center. 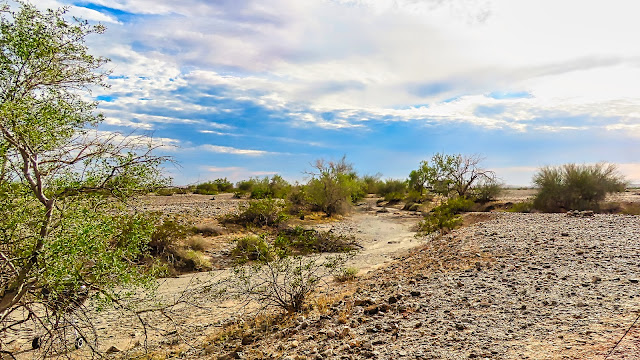 Had a nice day with not too much going on.  We had lots of world problems to solve and when done it was time to call it a night.  Time now to fix a hotdog for Yuma and me.  A little TV and then to bed. 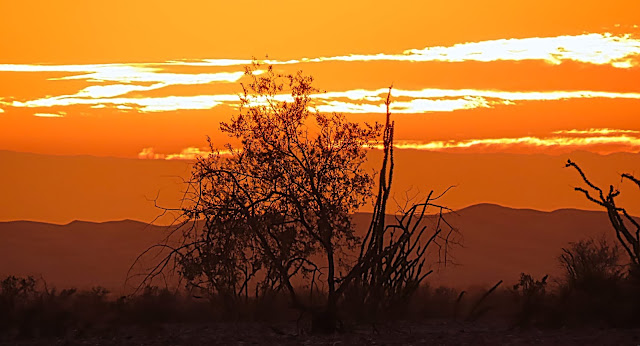