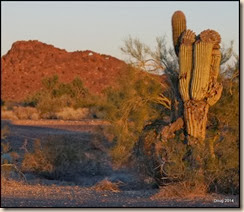 When we arrived at our boondocking spot on Thursday. I had this feeling we were being watched from afar.  Kept looking around for someone and then I spied it!  Not someone, but two eyes peering down at me from that mountain to the north of us.

I let it go for a day, but yesterday afternoon, I decided to make a friendly visit to old Evil Two Eyes!  Now, mind you this is not the official Arizona name, but it is the name I gave it.

Got my backpack out with two bottles of water and an energy bar to be sure I had what it took to make it to the top for my visit, and off I went walking across the desert. 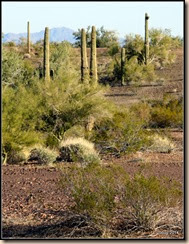 As I trekked through the desert, I noted the desert floor here is a dark reddish brown dirt just filled with gravel and rocks, both large and small.  There are plants everywhere.  I wish I knew their names.  I will need to do a little internet work to learn more about the plants found here in the desert.  I know the large cactus are Saguaro. 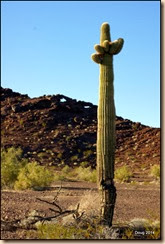 Here I am peeking around a Saguaro cactus and I noticed his eyes were peering right down on me.  Can’t hide any longer.  There is nothing between him and me any longer, except for the many small bushes that dot the landscape. 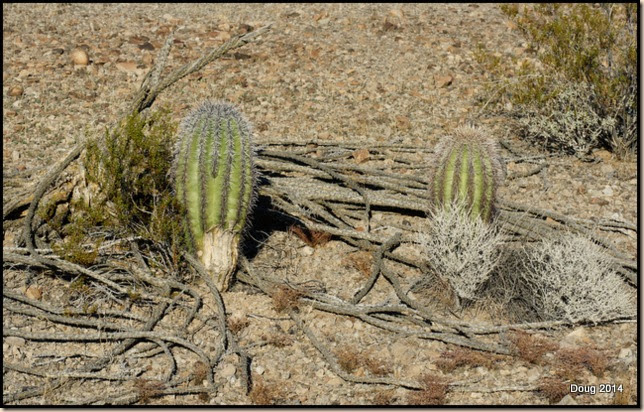 Got to watch my step around these Barrel cactus in front of me.  Looks like they are surrounded by a octopus, but it is a dead plant with its limbs sprawled everywhere around the cactus. 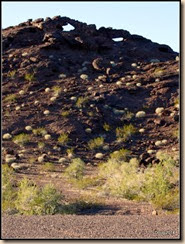 Gettin’ closer now.  Just a few more bushes and I will be off the desert floor and climbing Ole Two Eyes for our meeting.  It is not really a mountain, but a rugged outcropping of rock with plants all over it.  The rock looks to have gravel all over it too, which will make it dangerous to climb.  It is a hard jagged and sharp volcanic like rock surface.  Hope I don’t slip and break an ankle or fall and be sliced into pieces!  I could die up there and only Two Eyes would know. 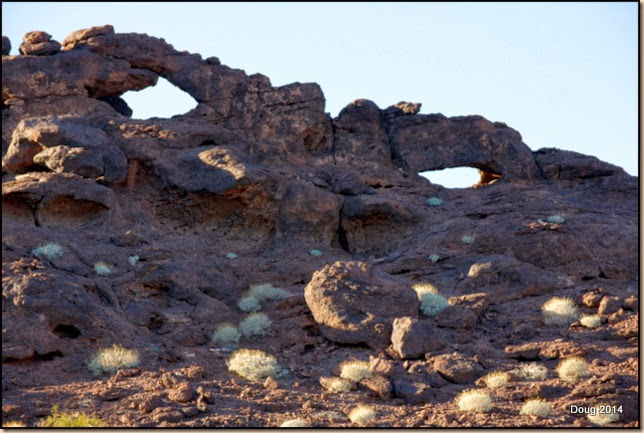 He sees me good now!  I think I heard him say “Who goes there?”, but it was probably the wind.  Lots of little puff ball plants everywhere.  Having to be careful I don’t step on them and that I don’t slip on all this gravel. 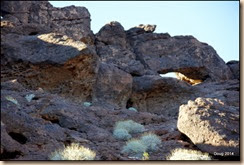 So close now I can only see the one eye and the sunlight glancing off the rocks through my camera lenses now. 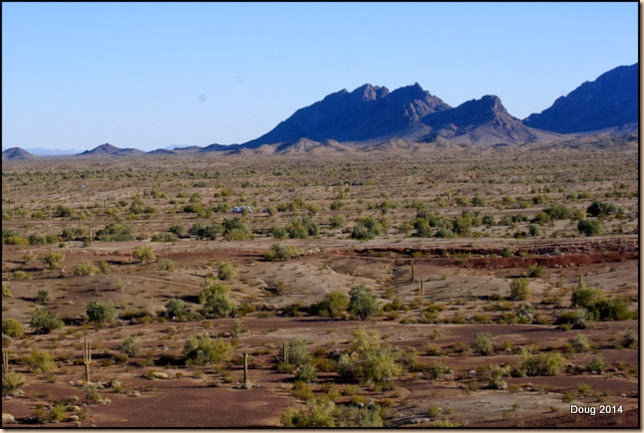 Looking back down to the motorhome.  That little spot about in the center of the picture.  Not many neighbors to bother us for sure! 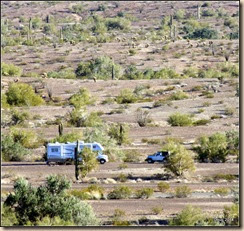 Zoomed in on our home from the mountain top. 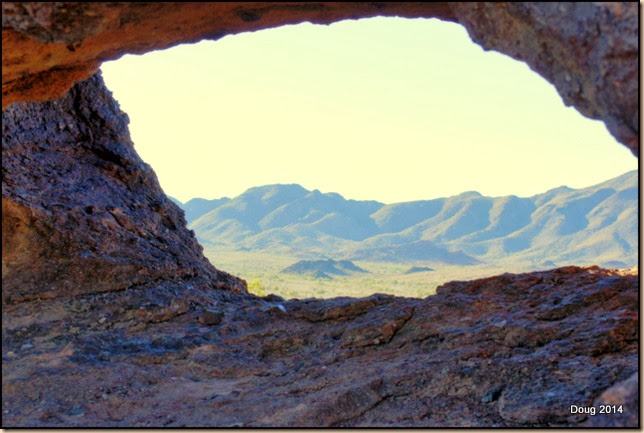 We meet eye to eye and have our little pow wow!  After deep discussion and the smoking pipe ritual, it is decided that Dolly, Fergie and I can stay here as long as we want.  That is, if I respected all things in his desert. 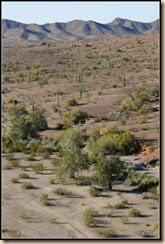 I agreed to his demands and headed home.

This morning, after breakfast, Dolly, Fergie and I headed to Parker, AZ.  Parker is about 25 miles north of Bouse, so we took highway 72 north and hooked on highway 95 just outside of Parker.

We had two reasons for going to Parker today.  First reason is to buy out the Walmart store.  We are getting desperately low on food.

But the most important reason is to visit our nephew Clay Nichols.  Clay moved to Parker last summer and is an English professor at Eastern Arizona University at Parker. 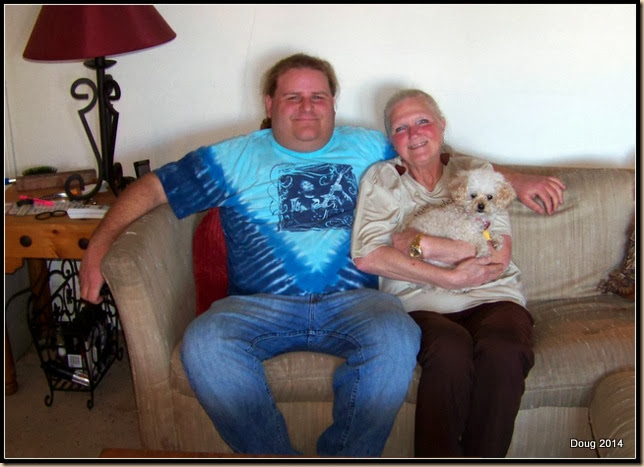 We arrived around 1:30 and met Clay at his home just south of the Colorado River.  After catching up on the last 18 years since we saw him last(he is 29), and touring his home, we took a scenic drive along the river.  California is on the other side.

We said our goodbyes until we meet again, then made a quick stop at McDonalds for lunch and crossed Riverside Drive to Walmart. 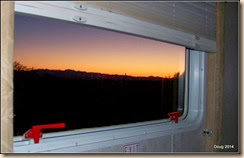