Woke up to a magnificent morning.  Didn’t get a picture of the sunrise, because I slept too long, so only a couple of pictures of our Quail Run RV Resort and surrounding area.  This resort has many activities and many long term snowbirds.  Reminds me of a 55+ park.  It is nice and the people are friendly and it is quiet after dark. 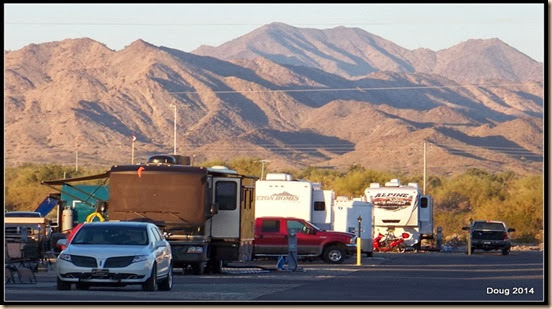 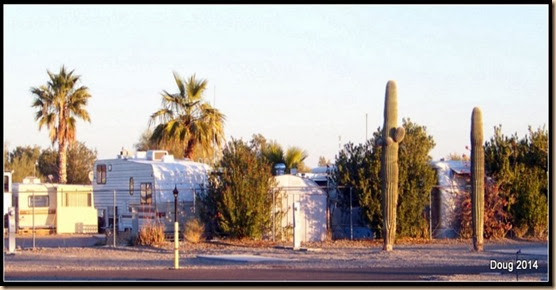 I knew this day was coming!  Dolly is wanting to watch the football playoffs tomorrow and there is no local TV channels in Quartzsite.  So, after a very nice breakfast, I pulled out the Dish Tailgater and placed it outside at the rear of the motorhome and plugged in the cable.  That was the easy part.

It has been about four months since I used the tailgater, and I did not document where the cables went when I last had it working.  Earlier on the trip, I plugged in a cable line that one of the RV parks had available, and changed the inside cables around till it worked, so things are now different.

There is a cabinet above the door that has three boxes in it and many cables running from one to the other and I have no clue how they all fit together.  I first started by hoping it would just work and turned on the Dish receiver and no luck.  Just snow on the TV.  Then started moving cables around from the switch box to the converter and then to the receiver until I was completely confused.  That’s when I called my tech son, Jim!

We went round and round, me sending him pics of the boxes and walking him through how I had it set up.  He was amazed at how good I had things screwed up, so after about an hour, he had me read of the names of the cable plugs on the back of all three boxes and said he would work with that.  I think he was tired of my confused state and wanted to get off the phone.  Finally, he got me running!  I had the Dish screen clear as a bell on the TV telling me that I was “NOT Authorized”.

That told me that Jim had done his job and now it was time for me to either read the Dish instructions or call Dish and beg for help.  I was so tired, I called Dish and begged for help.

A nice lady from Virginia by the name Loretta, spent an hour with me, sending Dish updates and walking me through the different screens.  Finally, she said this step would take about 15-30 minutes to process and told me to call back to Dish if it didn’t work.  I think she just wanted to get rid of me too!

Well, I sat their as the Dish receiver turned off and on and told me not to touch it as it did it’s updates.  I waited about a half hour after it turned off for the last time and I was tired of seeing the snow on the TV, so I hit the Dish receiver ON button, hoping for the best and expecting the worst.

Voila!
I had HD TV!
I had local channels out of Phoenix!
I had everything!
Boy, am I good!

Dolly has her Discovery ID and I am ready to go into town to see the Quartzsite flea markets.

So, about noon, I drove into town and ran up and down Main street.  Not a big place, so didn’t get lost.  Stopped at the first flea market I saw and walked around looking at rocks.  Lotsa rocks!  Didn’t know there were so many different kinds of rocks and gems.

Drove to two more flea markets and just couldn’t spring for one rock.  I was afraid I would spend money on junk, so didn’t buy anything.  I will leave the buying to Dolly, when she comes to town. 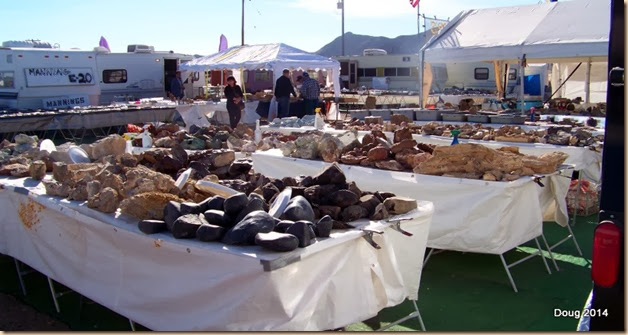 Been a nice day.  Not relaxing, but I did get the last choir done that I knew I would have to conquer.  Got Dolly her TV.  I am now  enjoying the nice sunset, and maybe tomorrow I will see more of the area and share them with you.  We have many beautiful sunny days ahead, so no hurry!