Got up around 8 am this morning, had breakfast and Dolly started sorting out all the dirty laundry.  She even took the shirt right off my back. 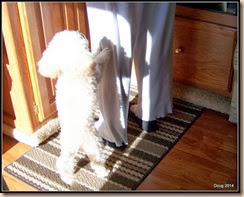 Fergie begging for my breakfast.

While she was doing that I took a quick bike ride up the street to look at heaters.  I had seen a sign just up the street in front of a couple of trailers that said Grandmas Fireplace and Heaters and I was curious.  When I pulled up, a man came out of a motorhome next to the trailers and showed me what he had. He had electric and gas heaters for RVs.  Just looked because I really have no interest in buying one, and they looked like just plain gas heaters.

Biked on down to West Main street looking at the sales signs to see if anything caught my eye.  Did stop in at a big tent selling stuff and came out with a large net bag I thought would make a nice laundry bag to hang in the shower.  Only $3, so I am sure I got a good deal.

Got home as Dolly was drying the first two loads and putting in a third load.  Only three loads after two weeks on the road.  Not bad!  I held Fergie while she folded the clothes and finished with the laundry.  The day still being young I decided to go to the flea markets and see if I could find LED lights.

Decided to bike the two miles down to the area since it is so flat and it will be easier to park.  It is getting very crowded down that one street with the flea markets on either side and the parking is limited, unless you want to walk a long way.  With the bike, I can lock it to any post or just watch it if not going far.  I got to use my hiking backpack I got for Christmas for the first time.  Put water and a snack bar inside and planned to put my purchases in it for the bike ride home.

Finally saw a tent the had RV LED Lights on the advertising sign out front.  Locked the bike out front and went in to find a young man answering questions and demonstrating the lights.  They talked and talked, so I walked around looking at stuff for awhile. When I got back, he was free, so asked if he had LED bulbs that would replace the ones I had in my pocket.  I had been smart and brought along two different bulbs we use a lot.  One bulb is used in all the ceiling lights and the other bulb was for the night lamps in our bedroom and over the dining table.

He looked at my bulbs and showed me the replacements on the big demonstration board he had.  $15 a bulb for the ceiling lights with the sixth one free and $10 for the smaller lamp bulbs.  Bought five with the sixth on free and two of the lamp lights for a total of $104.60 with their 10% tax rate.  Pulled out my billfold to pay for them with my trusty Chase Slate card and OH NO, it was not there!  I frantically looked through my whole billfold and still not there.

Paid with my debit card and put my valuable purchases in my backpack and quickly headed home, hoping for good news.  Dolly had used the card the previous morning to purchase groceries from the Dollar General store, so I hoped she had it and all would be right with the world again.

I then went online to check my account fearing I would find millions in purchases on my very high limit card, but luckily the last purchase was the $33.60 Dolly had charged at the Dollar General and it was still pending.

Sheepishly, I called Chase and had them put a hold on the card for now, so at least I can’t be ripped off while I continue to look for it.  Being an American consumer, I have plenty more credit cards where that one came from.

Then my brain slowly came back to the present and I showed Dolly my LED lights.  Tried to explain how much battery life we were going to save when boondocking with the very low wattage these used compared to the old ones.  I think Dolly was skeptical we would ever save $104.60 with the little boondocking we will ever do.  When I put them in they are much brighter than the old lights, so Dolly was happy about that. 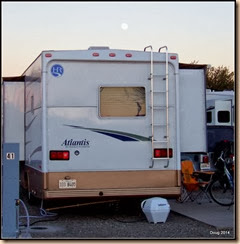 Just another day on the road.  See you later.