We awoke earlier than usual this morning.  I wanted to get out of Q before the town came alive and I would have to wait in lines to get things done.  We were on the road into town by 8:30, and got all our duties done and on I-10 heading west by 9:45 with Fergie leading the way.  Not bad. 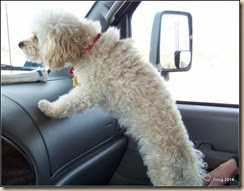 Took I-10 to the town of Blythe and because I had Miss Magellan on “least use of interstates”, it took me right through the business district of the small unique western town.

Since we only have a 135 mile trip today, we are in no hurry.  And the time zone gives us another hour as we go into Pacific time.  On the outside of town, I made a left on highway 78.  A very nice 2-lane road that went through the valley. 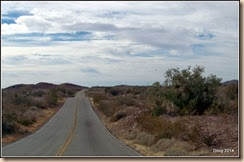 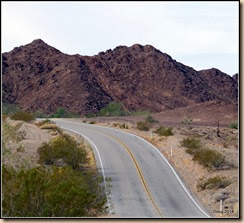 We continued our journey winding our way around the south end of the Chocolate Mountain Naval Reservation and then we hooked onto hwy 115 and then hwy 111 to Niland, CA.  We missed the turn-off at E. Main St. and had to turn around and head east out of town.  Main turned into Beal Rd. and about 3 miles out of town I could see Salvation Mountain off in the distance.  I knew we had arrived! 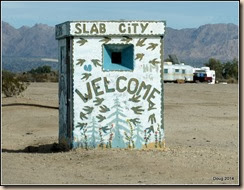 I pulled the motorhome into the first decent looking boondocking place after “the mountain”.  Couldn’t see running over anymore rough road than I had too.  A guy came out of his trailer and we talked a little bit.  I asked him if I could park over near the shrine, or monument to some dead guy.  He said I could park anywhere I wanted that gave others space.  I went over near the shrine and parked.  Then the guy in the trailer next to the guy I talked to came my way.

I had my camera with me, and the first thing he said was “what are you doing with that damn camera?”  I told him I wasn’t going to shoot him with it, and he seemed to calm down a little.  Dolly was out walking with the dog and came up and then we found out he was just a lonely guy named Pat trying to act mean.  We started talking and Pat would not stop!  Told us about his old neighbor, the dead guy we were parked near and about his years of sobriety and that he was a photographer by trade, etc., etc.

Finally, I said that I had to get us set up and after telling us where we could get water and where the free dump station was, he headed home and we were doing our thing.  We quickly got the jeep unhooked and took a tour of Slab City. 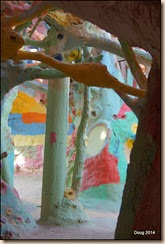 Tomorrow, I will post more pictures of Slab City and give you the short history of the dead guy we are parked near.  Today’s blog is already getting too long.