Q for Quartzsite on the hill

Came back to the RV and asked Dolly to go through her purse one more time while I searched the jeep for the fifth time.  I took everything out of it and no luck.  Dolly told me that the only place it could possibly be is around my seat, so I searched very carefully around my seat and VOILA, there it was on the driver’s side lying upright against the jeep body next to my seat.  Evidently, Dolly gave it to me as she said and then I placed it in my lap to reach over to help her put the groceries in the jeep and forgot about it.  At some point it fell off my lap and down the left side of the seat.

While Dolly was fixing breakfast, I called Chase and they took the hold off the card and my mind went back to LED lights.  We really liked how bright they were, so I decided to add one more to the double lights above the dinner table where I do my computing and get one for the bathroom.  The bathroom has three large round bulbs, so I took one with me.

After breakfast, I went back to the LED store and bought the two LED lights.  They had replacements for the bathroom lights, but I only bought one for $15 to use when boondocking.  It is very bright and one will do to light the bathroom and when we are not boondocking, I will put the old ones back in.

I again wandered around the booths for awhile and also looked at a new Montana 5th wheel that had a floor plan I just loved.  For only $93,000+ and a $40,000+ F350 dually Ford truck, I would be living in style and comfort.  “Never happen!” says Dolly. 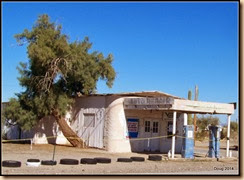 My new Arizona jeep
Came home and put the new bulbs in and since these bulbs are so bright, I placed only one in each of the living room and bedroom dual light fixtures and it brightens the place up considerably.

Later in the afternoon, I stopped by the Tyson Wells Stage Stop museum on West Main street. 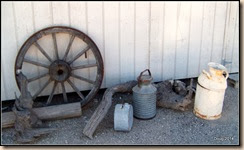 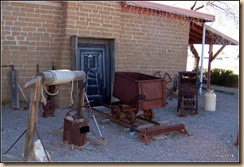 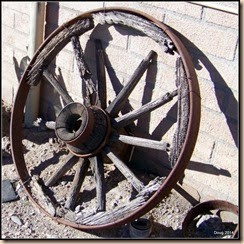 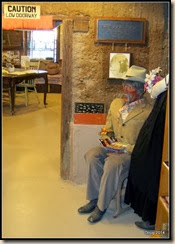 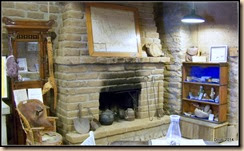 Late in the day, after it cooled down, I took Dolly to the Big Market to do some shopping while Fergie and I slipped down to the RV parts store to buy a compartment bay lock.  I have one compartment that does not stay closed.  Came back with compartment lock and checked on Dolly.  She was amazed at how little groceries the store had.  We may starve on our boondocking excursion.  I hate towns with no Walmart!

Got the groceries put away and then I put my bike on the jeep and filled the fresh water tank in preparation for our move tomorrow.  I have decided we will go north 5 miles to Plomosa Road and east over the hills.  We will go about 11 miles up and over the hill tops and find a nice boondocking spot not too far off the blacktop and high enough to give me a decent internet signal.

Been a long day and we have to get up early enough to be out by 11 am.  Can’t wait to see how boondocking works for us.