Another Hat and Exploring Quartzsite

Slept in till 8 am this morning.  Trying to learn to relax, but it is hard.  Woke at 5 am which is 6 back home, so my old habits haven’t died yet.  Just went back to sleep, instead of getting up.

Had a great breakfast and two cups of of coffee and by 11 am I was ready to rumble.  Took me three tries to actually get out of here.  First time I left, I returned immediately to get my cell phone and my hat, then I was off again.  Right back again; this time to get my camera!  Then, I was off for good.

First stop was to get another hat.  James, my brother-in-law had told me that cowboy hats made of palm fronds make nice hats, and Sun Body out of Houston, Texas made great hats.  Yesterday, I found a vendor that had such hats, but I already had the best hat; so I couldn’t want another hat.  Well, after thinking about it all night, I finally realized I could have two best hats, so today, it came true.  I now have two best hats.  One an Aussie Outback and one American cowboy. 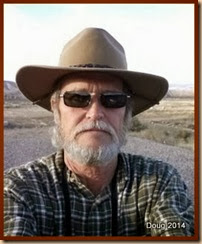 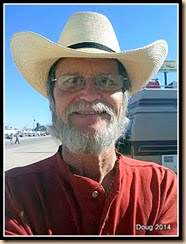 Saw this old man walking his bike through the swap meet with everything he owns, including his dog.

Next, I went to another vendor and bought an original true western leather coat with fringes all over it.  Dolly has had one for years that she wears in the winter when we go out somewhere in the evening.  Now, I have one and we will look like “peas in a pod”, when we go out. 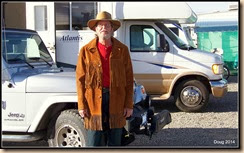 I told you it had fringes

I was finally done with spending money, so headed out west of Quartzsite on Dome Rock road looking for more boondocking places.  About five miles out, I found BLM land that was very close to the mountains and it was on a hard top road right up to where the area began, then it turned to dirt, but no washboards, thank goodness. 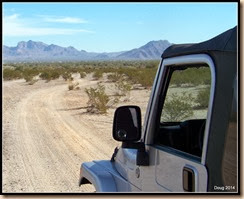 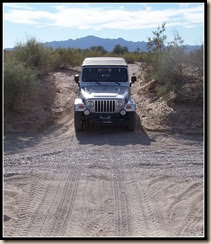 No boondocking spots down here. 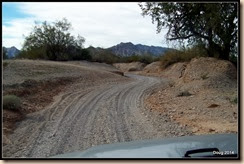 Maybe down this road.

It was about 3:30 pm and I was getting tired, so came back home to watch the end of the second play-off game with Dolly and had a late lunch.  That was about it for the day. 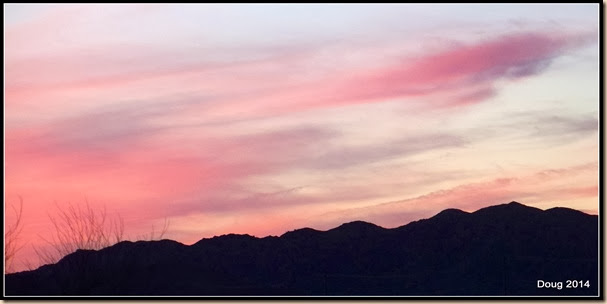