Got up this morning and had some coffee for the first time.  Around 11:30 we packed everything and headed five miles up the road to Meteor Crater.  The wind was going at 20 miles an hour with gusts to 35 coming from the southwest.  We dodged tumbleweeds blowing across the road. 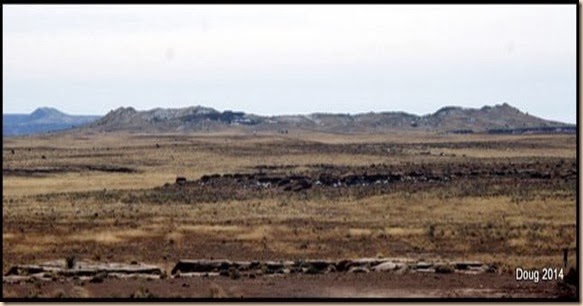 Crater rim from a distance. 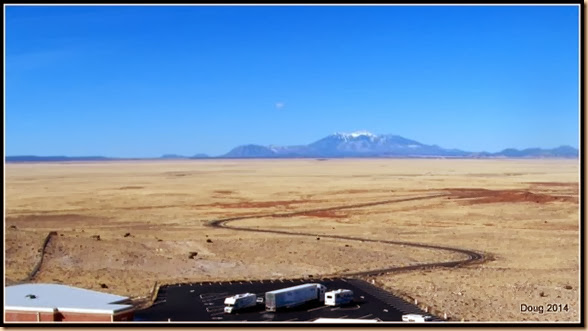 Humphreys Peak north of Flagstaff. 12,633 feet.  Our motorhome below.

When we got to the Crater, we found that we could not take the guided tour along the rim because of the wind.  At the top of the rim, the wind was ferocious.  Had to agree with their assessment.  We took in the six minute movie and then walked outside to the viewing areas that overlooked the rim and took pictures. 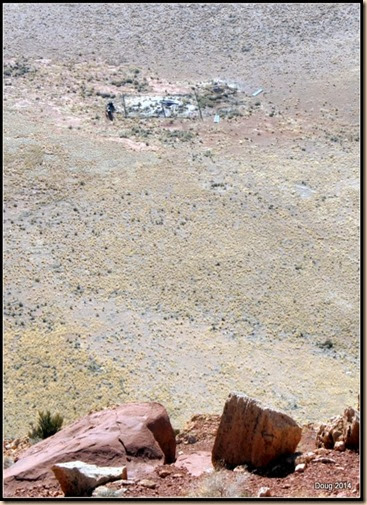 Mining site at bottom of crater. 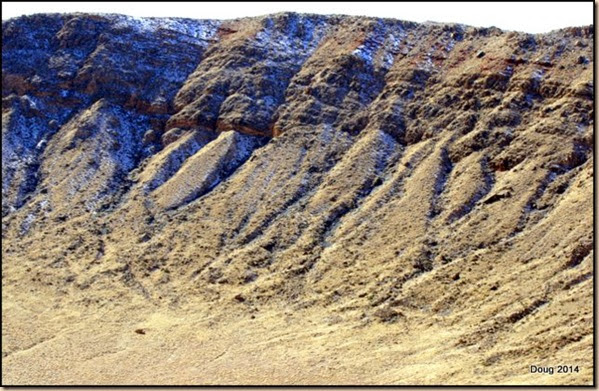 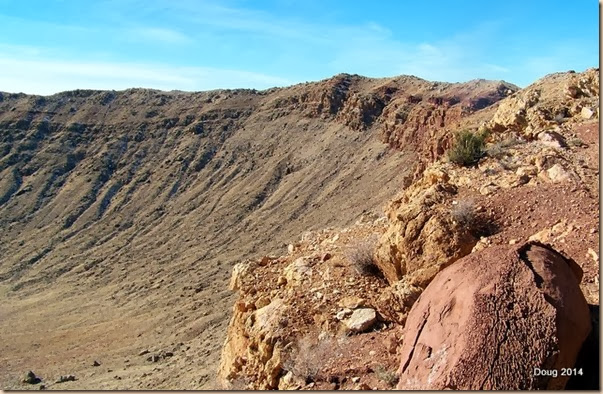 At about 1:30 we decided to buck the wind and drive the 50 miles to Flagstaff. 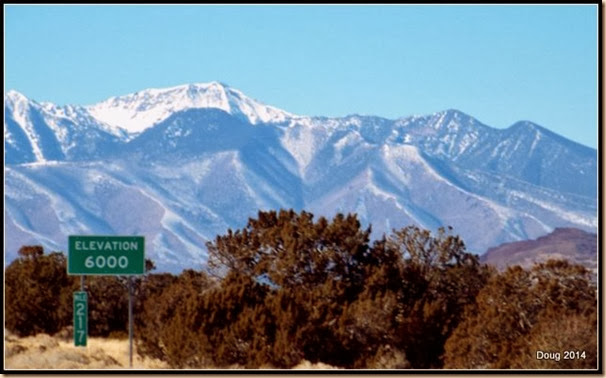 At the last moment we decided to take 89A to Sedona, AZ., a very scenic town on the slopes of Wilson Mountain.  It was a 25 mile drive on a very winding road that was extremely steep.  We went from 9200 feet to about 3200 feet, and I could smell brakes burning even though we were only going about 35 miles an hour.  There were many dead man curves zigzagging down the mountain through what looked to me like a deep ravine.

About six miles from Sedona, I decided to pull into a State Park to see if they had RV camping, but at the gate it was just a day recreation area and cost $10 to get in for the day.  That’s when I made a stupid mistake.  Instead of just driving in and turning around, I tried to make the curve from the entrance road around a half circle to the exit road,  Nope, couldn’t turn that 30 foot motorhome with jeep in tow around that small curve.  Stopped outgoing traffic when I came to a halt at the curb.  Couldn’t go forward – couldn’t back up with the jeep in tow.

The ranger came out and said he was sorry, he didn’t catch me sooner and tell me to go in and back out, but not all his fault I’m sure.  The ranger directed the exiting traffic to the entrance while I unhooked the jeep.  I then drove the jeep into the park and came back for the motorhome.  The ranger, Dolly and Fergie guided me as I backed up and drove the motorhome into the park.  Whew, that was exciting and pressure packed fun!

One good thing came out of this fiasco though.  I chatted with the young ranger and he was kind enough to give me a list of RV parks around Sedona and a brochure for Dead Horse State Park, saying this was a beautiful park in Cottonwood, a small town further south of Sedona on 89A.

I headed out, with Dolly and Fergie following in the jeep.  Stopped a couple of times for pictures of the beautiful rock formations near Sedona, but the camera failed me, so no pictures.  More on that later.  Went straight through Sedona, which is a big tourist town with people walking everywhere.  We will be back another day!

89A became a four lane highway south of Sedona and started leveling out, so the ordeal was over.  I am just glad we weren’t going north trying to go up the mountain.  Wouldn’t have an engine left in the old 450.  Dropped right into Cottonwood and I stopped and called the park and they gave me the directions right to the park.

So, here we are in a beautiful park high on a hill overlooking the town of Cottonwood.  This park definitely has the “it” factor for beauty with mountains all around and the town sitting in a valley.  We paid for two nights and we may stay a week.  Victoria, the park attendant said to stop by tomorrow and she would show us where we could drive the jeep to see some amazing country.  We also plan to drive the 17 miles back to Sedona in the jeep and do the tourist bit and take those pictures that failed us today.

After, we got settled, I made a dinner run to McDs and our day is done.  We’re tired, so see you later.