The sun woke me as it came over Pilot Knob Mountain at 6:45 again this morning.  I relaxed in bed and checked in with Dolly and my blog.

Got up at 7, because I wanted to call John the All Pro Water-Flo man about my stopped up black tank right at 8 o'clock and hopefully get an appointment today.  I'm at critical level.

Called at 8 o'clock,  9 o'clock Yuma time and right away, John answered the phone. 😀  How often does that happen!  He was waiting on my call I think.  He works at the same company as MCA (Middle Class American) one of my commenters.  MCA works in the Phoenix area.

We talked and I explained my problem.  John had two appointments, but said he could work me in after noon.  I was happy to hear that.  He recommended an RV park that was familiar with his services.  I called and they said to come on in so I reserved a site at the 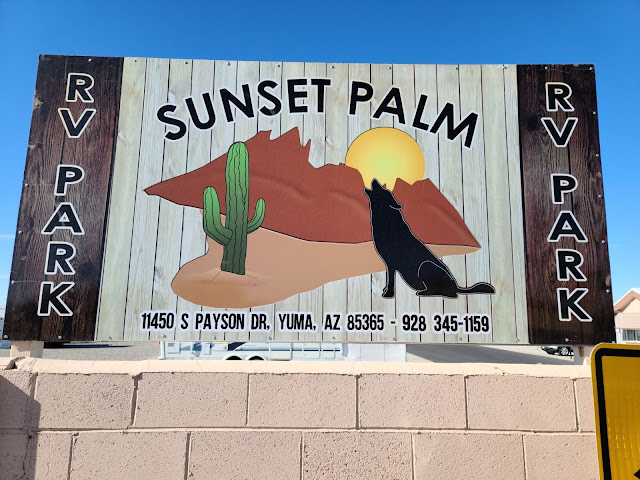 Very nice place and very reasonable on the east end of Yuma.

John contacted me on his expected arrival and was right on time with all his gear in his trailer.  He got right to work and since I was curious,  I asked alot of questions and he explained things as he went along.

It wasn't long before I realized this job was not for the amateur.  I won't go into details but he used a powerful special water tool to first get through the entrance into the tank.  He had to use a TV camera to find his way in.  Once in the first stuff to come out was sturvite crystals that were on the inner lining of the entrance pipe.

It wasn't too long before the stuff started to move and soon after the tank was empty and he could power wash it. Cleaned the gray tank too.  It was so good to see the gages show empty on both tanks.
John is very sociable and knows his job.  I thank MCA for the recommendation and John for fitting me into his busy schedule.  If you need your tanks cleaned give him a call at (719) 651-5213.  He always answers and you won't regret it.  John works six months in the Yuma area and six months in the summer at his other home state of Colorado.   Must be nice!

After John left, Yuma and I drove to the Walmart to pick up things I needed.  Took quite awhile and it was dark when I exited.   Hate driving in dark but we made it back to the RV park where I will stay the night.  Time to fix dinner and go to bed.  Exhausted watching John work 😀