When I awoke around 7:30 this morning, there was dew everywhere and fog on the mountains.  Didn't last long.  As soon as the sun hit the desert, the fog lifted and I could see we were in for a lot of cumulus clouds today and some wind.

Had a very long breakfast trying to decide what to do and came up with nothing.   Felt like I wanted a lazy day and as it turned out that's exactly what happened. 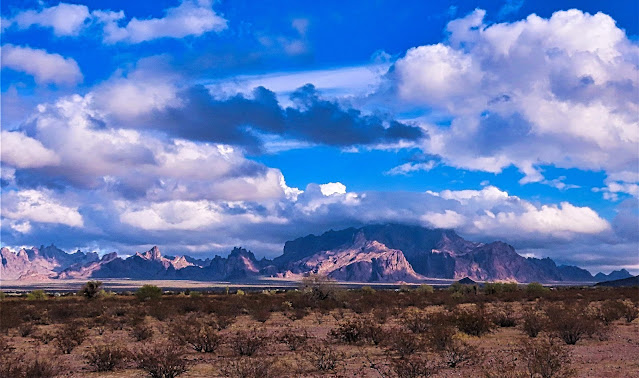 Last night I could not get the Dish to find the satellites even though I had not moved anything from earlier in the afternoon.  Hate it when that happens.  Ended up abandoning watching TV since there was really nothing on I wanted to watch anyway.

This morning, I was determined to get the Dish working early so I would be ready for tonight's Gold Rush.  Took a little changing the direction of the Dish, but finally the Dish found the satellites and I'm in busy.

Tried laying outside on the lounger this afternoon, but with the cool wind, I didn't stay out too long.  But while out there, Yuma started sniffing the air and finally wandered off towards the south.  All of a sudden he was barking, so had to get up to make sure he didn't get into trouble.

Turns out it was a lady with her German Shepard mix and I couldn't stop Yuma from going up to them.  Luckily, it didn't scare the lady too much and the dog was not on a leash.  But Yuma and this four year old were mad for each other.  They started running in circles chasing each other till they pooped themselves out.  Not one bark or growl.  Just had fun running!  Sorry, no pictures.

It wasn't the first time I had seen them.  Yesterday, as I was coming out of Queen Canyon, I passed her and the dog in the wash.  Evidently, she and her husband were exploring the area too.  What a coincidence.

The clouds and wind continued to grow throughout the day.  The clouds seem to accumulate right at the top of the mountain. 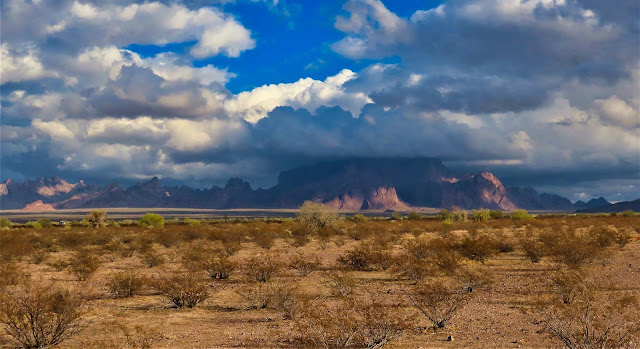 This morning I did remember to put some pork chops out before it got too late, but since I didn't do anything today, I may just have a snack for dinner instead of a full meal.  It's 5 o'clock already and my shows begin at six so better get things done so I won't be interrupted.

See you later.
Posted by Doug Laning at 7:28 PM