It rained quite a bit again last night and I woke up to dense low clouds on the mountains.  They are calling for a mostly cloudy day and cool.  Unfortunately, this weather has invaded the entire southwest through Wednesday.  I know others have it much worse....but! 👳 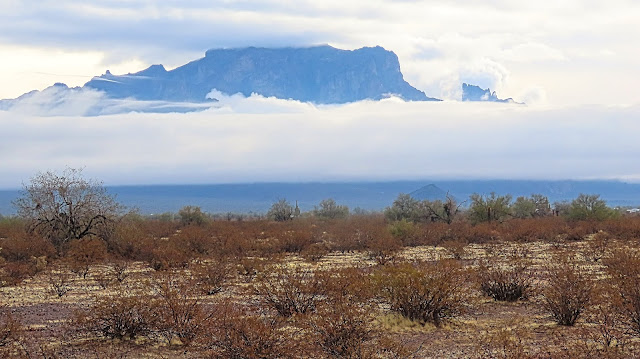 I knew I wasn't going anywhere today anyway, so I just had a leisurely breakfast and did a few choirs.  I thought the game started at 11 o'clock but Dolly corrected me and said the first game wasn't till 1 o'clock so I had a couple hours to kill.  Actually mopped the floors twice to get all the dust, dirt and hair off the floors.  Looks better but it is a lost cause.

The first game between Green Bay and Tampa Bay was a battle all the way.  In the last part of the 4th quarter it finally became evident the Tom Brady is going to another Super Bowl.  I was rooting for Green Bay but it wasn't to be.  Sorry Ben!

Later in the afternoon, Tom and Deb, Celebrating the Dance stopped by to say hello to Yuma 🐕 and me.  We had a nice visit and they headed for home.  Yuma got his pets in.  Sure we will be seeing each other again.

I fixed a bowl of stew with buttered crackers and that was my dinner.  Wasn't in the mood for cooking tonight.  Then I watched Kansas City beat Buffalo quite handily and that ended my day except for writing a short post and calling it a day.