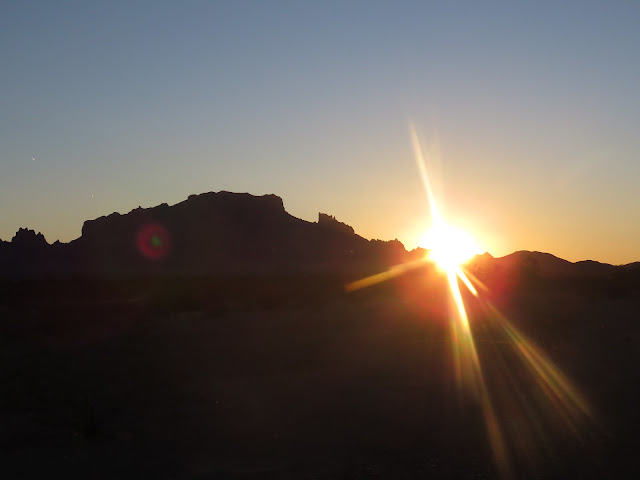 Woke up early this morning just in time to catch this beautiful sunrise coming up over Palm Mountain.  Skies were absolutely clear and already beginning to warm up.  Today will get to around 80 degrees, so better get started early.

Yesterday, I wore out the Jeep, so today, Yuma and I decided we would do the walking.  My goal was to climb past the palm trees and go all the way up Palm Canyon and see what was up there.

We left early, at 10 o'clock and by 10:30 we had arrived at the base of the canyon.  Always a beautiful drive. 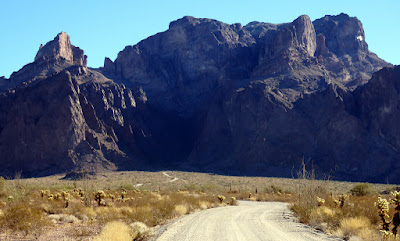 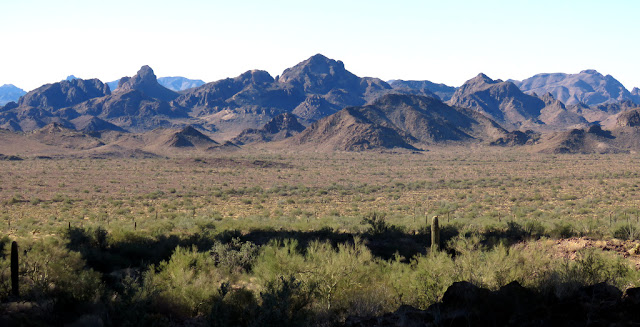 Didn't take us long to make it to the sign indicating we had arrived at the palm trees.  I felt better than the other day after the hike. 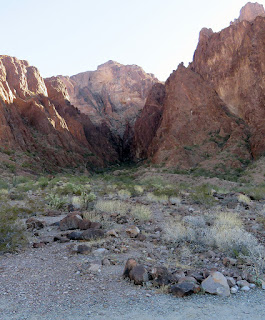 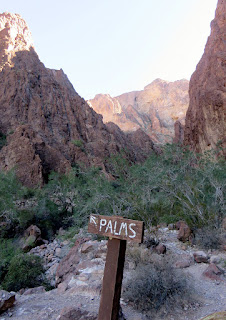 Then we started up the canyon and there basically is no trail.  You try your best to follow where others have gone, but on rock sometimes that was hard to do.  Several times we had to backtrack because we couldn't proceed any further.  Then we would find the right way and kept going up. 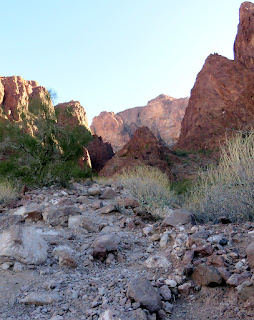 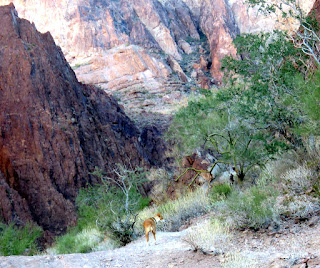 Yuma was great at leading the way, but he didn't always take the easiest route.  Sometimes I just couldn't go where he went.

I kept hoping it would become easier, but it didn't.  The higher we got the larger the boulders we had to go over, under and around. 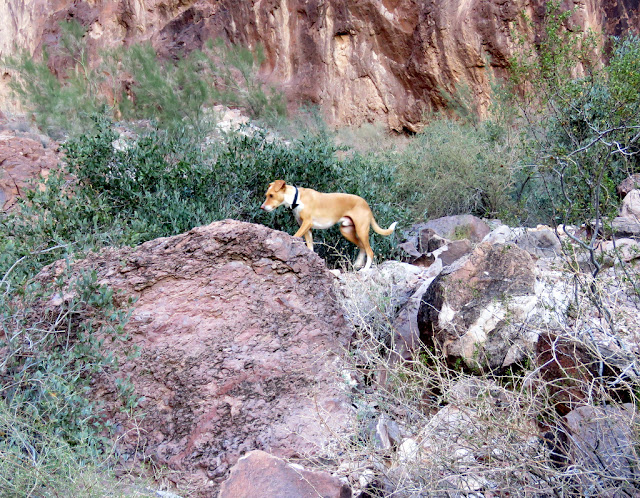 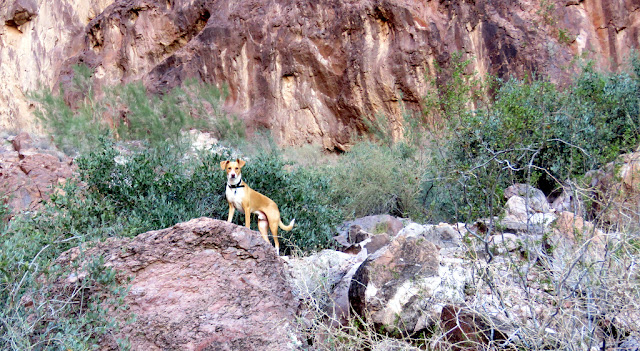 See the cliff in the sun on the right?  That is where I want to get to. 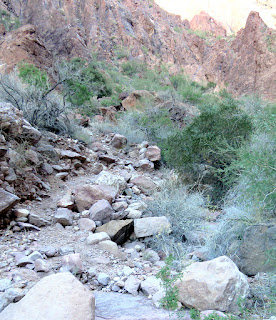 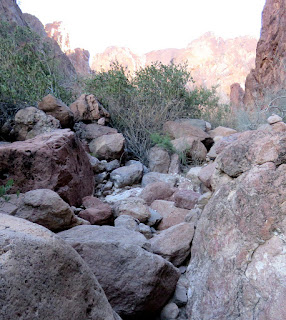 Looking back out over the Sonoran Desert. 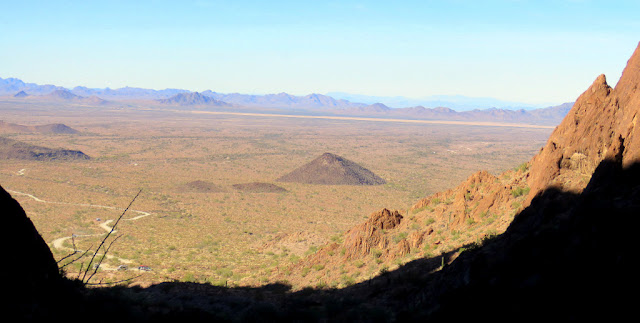 We're much higher now looking back out over the desert.  There is one last palm tree higher up in the canyon that not many get to see because of the difficulty of getting to this point. 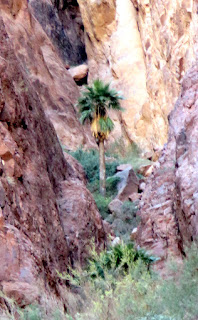 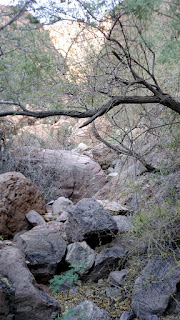 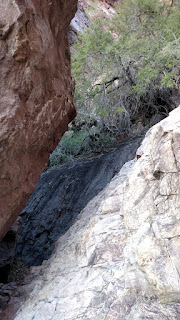 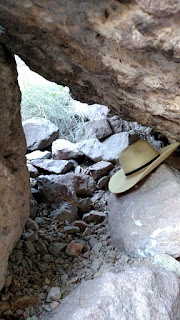 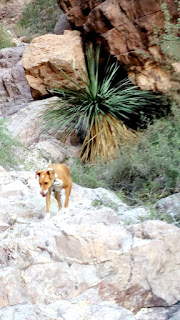 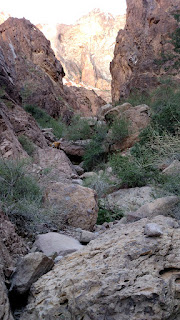 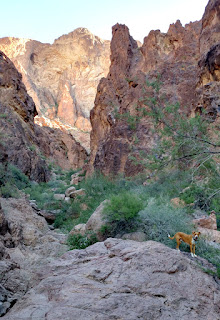 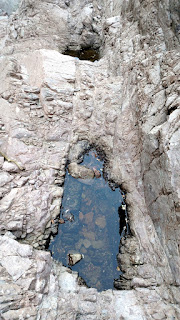 Yuma is starting to look back down and balk a little.  He's giving me that fear look.  I'm also plain bushed.  We're close. 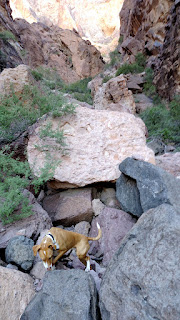 I must have been within 800 feet of where the sun was coming through the canyon above but that might as well have been a mile.  After two hours of uphill rock and boulder climbing I could go no further.  Even Yuma was reluctant to climb the last boulders.

I am tired and dejected.  I just kept hoping the climb would get easier towards the top, but instead, it became harder.  If I was 50 years younger, I would have made it!  But not me and not today! 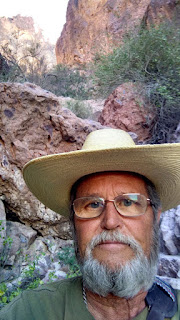 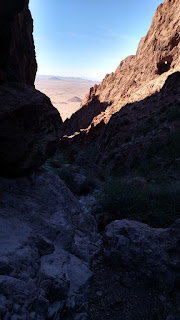 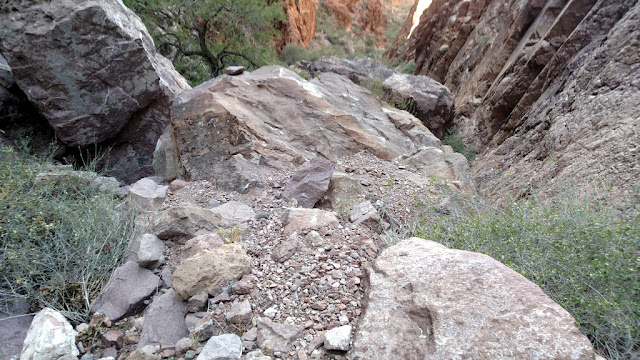 I began to worry that Yuma would not be able to go back down once he saw the height of what was below and I knew I was too tired to carry him.  With our goal in sight, I made the decision I would turn back without reaching it.  I knew it was the right decision because my hips and knees could hardly support my weight any longer.

We slowly made our way back down to the Jeep without mishap and were back at the RV at 2:30 P.M.  Time for some serious rest and recuperation.

See you later.
Posted by Doug Laning at 7:31 PM