Batteries in and Running

No one came knocking last night while at the parking area of the RV Connection.  Didn't have a good night sleep though, because around 5 in the morning, the traffic outside was busy and loud.  Busy street here in Yuma.

The store opened at 8:30 and I went in and Tom, the owner, was in his office.  We talked for a bit and he said he would start as soon as the chill was out of the air.  He asked that I move the White Lion close to the door so he wouldn't have far to go with the six heavy batteries and I did that. 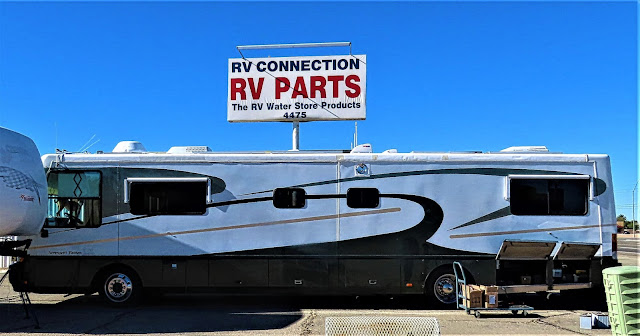 At about 9:30, Tom was hard at work.  First he removed the four old house batteries on the passenger side and replaced them with four Weise 100 amp batteries.

The two dusty ones to the left are the starting batteries and were put in when I bought the motorhome last year.
Because I wanted six batteries for storage instead of four, Tom placed the last two in the bay on the other side of the motorhome.

I now have an additional two new batteries for storing the solar power that is in abundance here in the southwest. 😃
It was exactly 1 o'clock when Tom had everything buttoned up and I was ready to pay and go on my way.
While waiting, I finally made up my mind where to live for the next couple of weeks.  Hard making these decisions.  I decided I wanted to be in the flat desert so I could clearly view the Christmas Star this evening.
Be aware, a lot of the following pictures were taken with a lot of zoom.  Also, I lost an hour so my times got confusing. 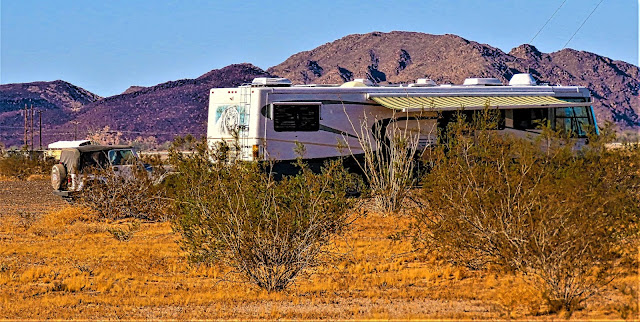 In the above picture, there was a fire with smoke off to the North causing the reddish haze.
Trying to stay on Arizona time, so my times will reflect that time.
It was warm here today with no wind.  I decided today would be a great day to fire up the water heater and Yuma and I would both get showers with all this water I have.  Yuma was a happy camper to get the smell of the desert sand off him.  And me too😛
After dinner, I waited for the sun to set in the West so I could get a clear picture of the Christmas Star.  As you know it is the glow of two planets close together (Saturn and Jupiter).


I took a lot of pictures but I'm just not equipped to take stills.  When I push the camera button there is a motion and with full zoom you can see it in the picture.  This was the best of the lot.
I think those of you familiar with this area know I'm parked behind the Pilot Knob RV Park and to the West in BLM land.  As I drove behind the park, it was nearly empty.  Not the crowd like last March when I stayed there.  The BLM out here is also empty with lots of space.  I did manage over 7200 steps today walking the desert.
I like it here and think I will be staying for the next couple of weeks.  Less than 10 miles to the nearest Walmart which is a plus.  Plus the weather is supposed to be fabulous.
See you later.
Posted by Doug Laning at 10:19 PM