Started my day around 8:30 and it was much warmer outside than inside so I immediately opened the windows and door to let the warmth inside.  For the first day I could see clouds moving in and they are calling for more this afternoon, but the temperature is to get to 75 so it will be a warm one.

I am in a rut with my mornings.  By the time I get through my crackers, two cups of coffee, either eggs or cereal and then my half grapefruit and orange while basking in the morning sunshine it is noon before I'm done with breakfast.  I know a lot of people are go getters in the morning, but I'm not one of them.

Well anyway!  After I fiddled with the front TV and the bedroom TV to get them both working properly, Yuma wanted to go for a walk.  By this time it is 2 o'clock.

Decided to drive the complete scenic drive around the mountain to Ajo and make a stop at the nice park in town that has real green grass.

While driving along the drive I decided to stop and let Yuma run in the wild since he will have to be leashed in town.  Here are some views. 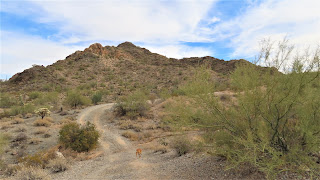 Stopped just off the main road and parked so I could get some exercise along with Yuma.  We walked up this dirt road towards the mountain.

Once we got as I high as I cared to go, I took pictures of the view around me. 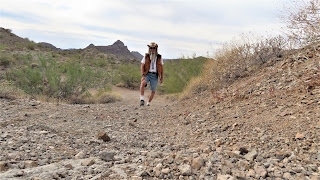 It's been awhile since I've used my uphill muscles and they need to be strengthened, that's for sure. 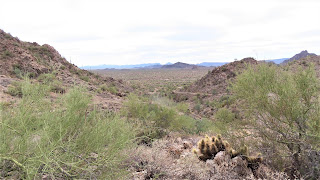 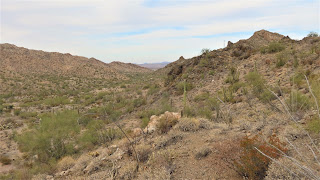 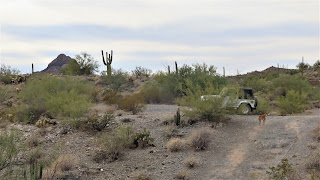 Made it back to the Jeep finally.  And off we go to greener grasses. 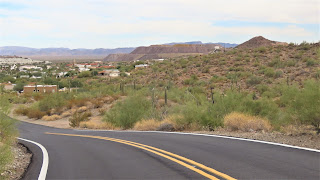 As I rounded the mountain into Ajo the road turned to asphalt.  On the right in the distance is the huge open pit with tailings piled everywhere.  See it better when I take you to the pit some other day. 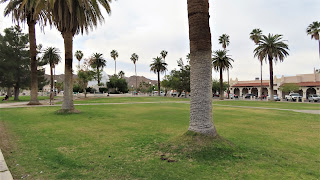 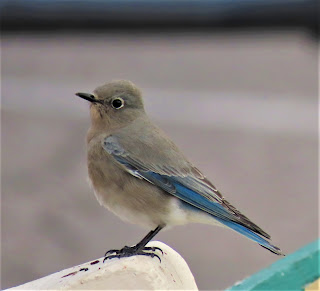 I'll let someone tell me what bird this is.  Looking at Google I could only come up with a Blue-gray Gnatcatcher.  Saw it on a bench at the park.
Yuma enjoyed his walk and sniffed every bush and post and wall and bench he came to.  Hope he's happy. 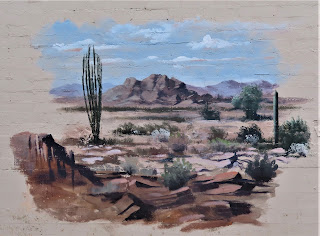 As I was leaving the park, I took pictures of two wall murals.  The bottom one is a beautiful mural of Black Mountain.
Around 4 o'clock when we got home and it was dinner fixing time.  Getting better at this and was finishing dinner before dark.  Still 72 out so Yuma and I took a nice walk as it got dark.  Only made 6500 steps today but with the up and down felt like more.
It is time for writing my blog and then dessert before settling down for a little TV.  This is a grand life and I'm thankful for it.  Today is the 79th anniversary of the Pearl Harbor attack and I pause to think of all those that lost their lives that day.  My Dad was 21 and joined the Air Force soon after.
See you later.
Posted by Doug Laning at 8:26 PM