The morning was perfect.  Cold but sunny.  I decided to head out at 7:15 as the sun was coming up and have breakfast down the road.  They were calling for a cold front to come in with wind, so I wanted to get to Deming early and settle in.  Ha!

Yuma enjoyed seeing the flat lands and helping me navigate.  We stopped at a rest area and had our breakfast. 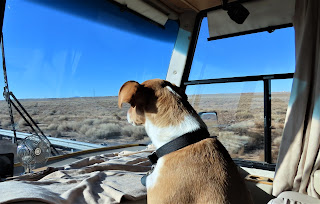 As you can see the weather was perfect again today.  Sunny with no wind as we headed towards Albuquerque.  As we drove along the land was fairly flat and then as we got nearer to Albuquerque we could see mountains.  Just as we arrived into the city, we went through the Sandia Mountains and then down into the valley where Albuquerque is. 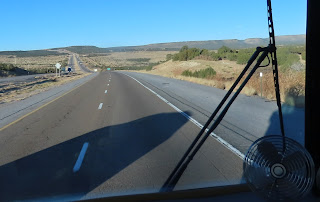 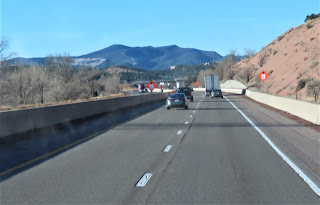 Just wanted to give you a flavor of what we were seeing as we drove along.  I am taking these out the window with one hand so they are blurry.
We turned onto I-25 from I-40 inside the city limits.  The markings were great and we had no problems at all finding our way.  I-25 is a beautiful road for most of the way.  I was glad t finally be heading South after three days of going West.
Stopped in Truth or Consequences for diesel, my only stop of the day for fuel. :))  The Elephant Butte State Park with its beautiful lake was on my left as we drove along I-25. 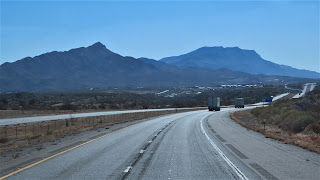 Here's another one of Yuma's favorite places to get some sun.

At the small town of Hatch, we headed toward Deming, New Mexico on highway 26.  It is a two lane road but saw only one car behind me the entire 30 miles.

Made good time all the way to Deming.  Still took about seven hours but it was smooth sailing.  Then things went bad.  Last year when I stopped at Walmart they told me to go next door to a vacant building they had bought and it had plenty of parking.
So, I drove past Walmart and went to turn into the drive and I almost ran into a cable running across the drive.  It was a four lane road and when I turned left across the oncoming traffic I didn't see it.  There I was stopped blocking both the lanes of traffic on the busiest street in town.
I got out to see if I could remove the cable but no luck.  By now, people were honking because I was blocking the street completely.  I tried to pull the stake out of the ground and then I heard someone say "you can't do that." and I turned around to see a motorcycle policeman with a bull horn.
He started directing traffic and I told him I would have to unhook the jeep but luckily this street person walked over.  I asked him if he would steer the jeep while I backed out.  Thank goodness he came along and was nice enough to help.  Backed up enough while the policeman stopped traffic so I could get back on the street and out of the way.  Gave the man $20 and it was the best money I spent today.   Sorry I didn't take the time for a few pictures. :))
He also told me the city had made it illegal to park overnight in the city limits.  Made a decision to leave Deming behind.  Too bad!  I had stayed there overnight for a number of years.
Got on I-10 and headed west looking for the next rest area and luckily about 15 miles down the road there it was and I'm in a nice rest stop for the night.  By this time it was 4:30 so it took from 7:15 to 4:30 to end my day. Nine hours and change!  Good thing I started early.  The wind had picked up in the afternoon, but it wasn't a bother and the temperature is very comfortable.

All in all it wasn't really a bad day.  Could have been worse. 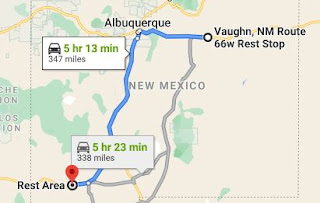 See you later.
Posted by Doug Laning at 9:17 PM