Nice to go from Drive to Park

Started this day out by sleeping in.  So nice to not have to drive today.  Got up up around 8 o'clock and sat around drinking two cups of coffee while eating my Ritz crackers.  Had my last two boiled eggs Dolly made me for my trip.

So I boiled six more and then Yuma and I took a walk.  He loves being free to run around.  He is always looking for a rabbit.  He saw a roadrunner racing through the brush and took off after it.  No luck!

It was already in the mid 50s with lots of sun and a slight breeze by the time I pulled out my large green rug, table and lounge chair.  Just after this picture I had to go inside a put on shorts.

By the time this was done it was time to relax. 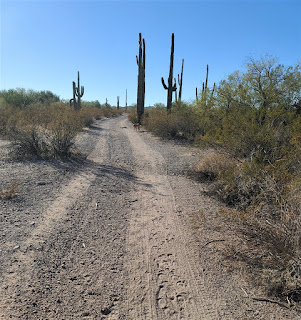 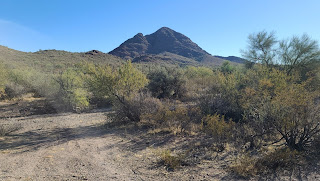 and then around 3 o'clock I started setting up my Dish for tonight's Gold Rush and Gold Rush White Water.  I walked 7635 steps today.  Won't be long before I will be hitting the 10,000 mark.

Then I had problems.  Finally got the Dish up and I thought it was running and then it gave me a message saying my account would not allow me to view the channels.  Called Dish and a nice guy from Mexico answered right away and was ready to help.  Since I had not used this receiver in a number of months it needed to be updated and reset which he did for me.

This time when I rebooted and got it going again my channels were all there and ready to go.

My brother Richard from Merritt Island, Florida called and we got ourselves caught up since the last time we talked about two months ago.  His son bought 20+ acres and he and his son, Jonathon have been clearing part of it for a future RV Park.  Maybe next winter I will spend it down there and watch the rockets go off across the bay at Cape Canaveral.

I was running a little late so I cooked two hamburgers on the burners instead of using my propane grill.  Tomorrow I'll try that before it gets dark.  Better pull something out of the freezer before I go to bed or I'll be having stew from a can. :(

Got the burgers done and Yuma and I ate dinner as Gold Rush started.  After TV it was time to get my blog finished and published.

One last map of my journey.  This one shows the entire length of the trip.