Today turned out to be a beautiful day.  We had partly cloudy skies and 60 degree temperatures.  We decided to take the motorhome to an RV wash here in Tucson.  The motorhome was filthy and had salt on it from the roadtrip.  We wanted to get rid of the salt.  Found Tucson RV Wash about 13 miles down the road from us.  About noon we closed everything up, left the jeep and headed across town.  They did a great job and it was only $45, including a $10 tip. 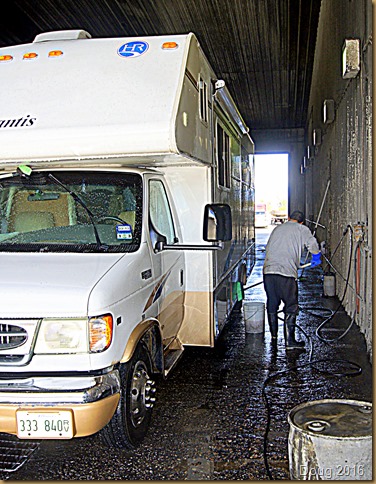 From there we did a google search for the nearest Walmart to do some shopping.  I don’t know how we ever survived before Google Maps.  Just put in what you want to find in the Google Search and then it talks you right to the place you want to go using a map.  Technology is amazing.  Did our shopping and we were done by 2:30.

Did a little practicing on my guitar.  Yuma and Fergie are the only ones that can stand my playing. 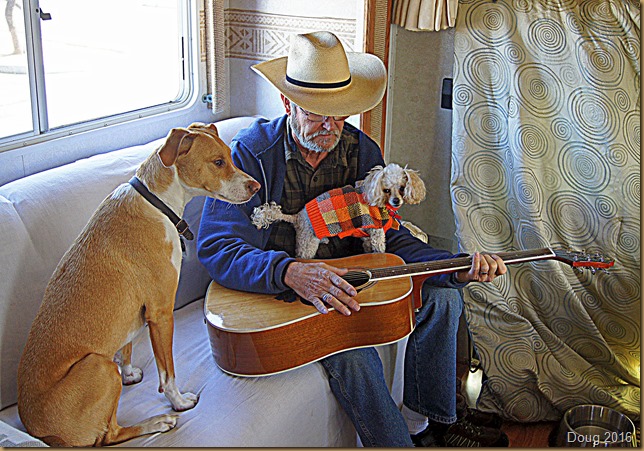 I forgot to mention that yestereday, I fixed the bathroom door.  We have owned the RV for three years and the bathroom door would never stay shut.  If you were not on flat ground the door would always swing open.  And it would swing open while driving down the road unless you put something up against it.  Well, yesterday was the day to see why it wouldn’t shut.

I then took the Jeep down to the ACE Hardware store and got a new telephone wire, came back and tested it with the new wire.  Worked perfectly.  I then rewired it, but this time ran it under the motorhome in a place that had plenty of room between the frame and the bottom of the motorhome.  Now I no longer have to go outside, go around the motorhome, crawl under the slide, open the bay and manually switch the inverter off and on.

All in all, it as been a good couple of days to get things done around the motorhome.